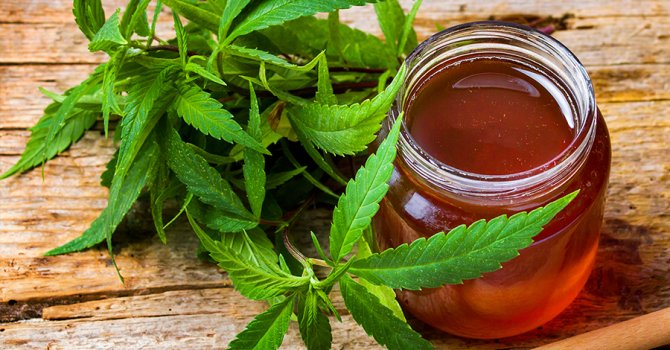 Like many great discoveries in medicine, it started with an ‘Aha’ moment when Canadian physician Dr. Vincent Maida realised that leg ulcers could be penetrated by fat-loving cannabis compounds, which in turn could reach the plethora of cannabinoid receptors below.

Very few people are more committed to finding a better solution for wound management than Dr. Maida, who amongst other things runs a tertiary wound clinic caring for the most hard-to-heal leg ulcers in the greater Toronto area.

“Integument [the outside skin, cutaneous membranes and mucous membranes] and the wound is the area of healthcare with the worst outcome measures,” explains Maida. “And yet, when you look at the massive expenditures – the United States spends upwards of $80 billion a year on wounds. And most of that I can submit to you is in vain and is just silly dressings that do nothing.”

Leg wounds that refuse to heal

Unless we ourselves are elderly or care for someone over the age of seventy, it’s unlikely we’ve ever given much thought to leg ulcers, which are defined as a long lasting sore that takes more than two weeks to heal.

In the worst of cases, open leg wounds can lead to amputations, sepsis, and even death.

I certainly hadn’t until my brother, who like me has been blessed with a hearty array of varicose veins from a tender age, started to get leg wounds that refused to close.

Standard care for leg ulcers follows the ‘Wound Bed Preparation’ paradigm (in Dr. Maida’s words the ‘silly dressings’), alongside compression bandages to assist the venous return and speed up healing. Antibiotics are also routinely prescribed for any accompanying infections, although according to Maida there is a tendency to overprescribe.

In my brother’s case, twice weekly visits for dressing changes over three months were enough to see his wounds close. But according to Dr. Maida, he was one of the lucky 40% whose ulcers heal in under twelve weeks. The other 60% can go years with open leg wounds, which in the worst of cases can lead to amputations, sepsis, and even death.

Ulcers are also generally extremely painful, with around 70% of patients, according to Maida, prescribed opioids to manage the pain.

According to Dr. Maida, not only does pain reduce the body’s healing capacity, but opioids themselves are now thought to slow down the healing of chronic wounds. And with the opioid crisis still wreaking havoc across North America, it’s clear finding an alternative approach to both the management of wound pain and its overall healing must be found.

Which brings me back to Dr. Maida’s lightbulb moment.

Determined to find a more effective alternative to the current Wound Bed Preparation Protocol, Maida embarked on a Master’s Degree at the Dalai Lama School of Public Health in Toronto.

“Working in a country like Canada,” he recalls, “where the (medical cannabis) legalization pathway was evolving, it was one of those epiphany moments, I realised that there was a potential to use cannabis and the elements of cannabis in the arena of integument and wound.”

And so began the early stages of his research studying the preclinical data relating to the wound healing properties of compounds found in cannabis.

It should be pointed out at this stage, that we’re not just talking about cannabinoids like THC and CBD, but also terpenes such as beta caryophyllene, and the flavonoids quercetin, diosmin, and hesperidin. In fact, a FDA approved drug called Daflon is already on the market in the US for the treatment of venous circulation disorders combining the flavonoids diosmin and hesperidin.

But what made these cannabis compounds so well suited to ulcer healing was their ability to enter directly through the wound and reach the endocannabinoid receptors below.

“The surface of our skin is relatively intact,” explains Maida, “and whether it’s mucous membranes, or cutaneous membranes, you don’t get much absorption through intact integument. But when you have a wound, you don’t have the epidermis. And the various molecular families can penetrate much quicker through an open wound bed.”

“And that’s where it gets exciting,” says Maida, “because we now know that the endocannabinoid system is ever present in our bodies from head to toe. It’s the most significant chemical signalling system from a homeostatic standpoint in our bodies. Not only is it represented and expressed on the surfaces of cells, but recent research is showing just how influential it is at an intracellular level, which opens up this new spectre of the ability to modulate genes, aka epigenetic mechanisms, etc.”

So, unlike the usual challenges faced by cannabis topical creams which struggle to permeate through the dermis, for wound management at least, they are a therapeutic match made in heaven.

Ulcers are extremely painful, but opioids may slow down the healing of chronic wounds.

And the results Dr. Maida has seen with his patients appears to bear this out.

Using a proprietary blend of cannabis compounds based on his systematic review of data, Dr. Maida began tentatively treating patients in his wound clinic.

Preliminary results cataloguing the experience of two elderly patients who despite having borne the suffering of their wounds for over six months, found total closure using Dr. Maida’s cannabis-based treatment in a mean of 73 days. Not only that, the patients’ pain was significantly reduced so that by day 63 no other analgesics were required.

A further open label study self-funded by Dr. Maida in which fourteen complex patients with recalcitrant leg ulcers were treated with his formula alongside compression bandages found that 79% patients had total wound closure in jaw-dropping 34 days.

While impressive, Maida is first to admit these are preliminary results on a small cohort of patients, and he hopes a letter of intent from an international biotech company will eventually bring about the further phases of clinical trials required to get his cannabis-based topical drug to market.

In the meantime, Dr. Maida remains very much a man on a mission.

“So, I’ve started the race,” he says, “and I’m going to sprint down the track. And then ultimately, I need to hand off to others who are going to take the marathon forward. And if nothing else, that’s my role. That’s my mission… and I think the finish line is going to yield incredible opportunities for the world of integument and wound.”

Why you should go for IELTS instead of  TOEFL

Movers in Silicon Oasis – Tips for a Stressless Move

Admit it - there is something about the retailer of the branded kratom brand and technology that just makes you...

Movers in Silicon Oasis – Tips for a Stressless Move

What is the best electronic cigarette for quitting smoking?

The Great Ideas To Know Before Starting Your Own Restaurant